Baby monitors are very helpful when taking care of toddlers and infants. They are excellent tools when it comes to multitasking and gives one peace of mind when away from baby as they perform chores around the house or sleep in their own bedroom. Thus baby monitors are simple equipment that are a must have in today’s environment as it lets you keep watch of your baby even when you are away from him/her.
One of the major companies which specializes in the design and manufacture of baby monitors is Infant Optics. Their two main products available today are the DXR-5 and DXR-8. 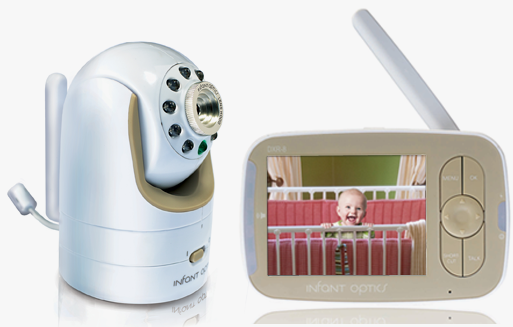 Explanation.
The DXR-5 was the first model to be launched by infant optics. Its success around most countries gave way to the making of the DXR-8 which has better features. Let’s take a look at what both models have to offer.

1. Audio
– The DXR-5 comes with a two-way talk feature that has been implemented very well. The voice coming from both sides is very clear allowing the baby to be soothed even from a distance. It has also been implemented with the standard voice activation (VOX) which allows it to activate itself when there is noise coming from the baby’s room.
– The DXR-8’s audio features also comes with a two-way talk feature that gives out clear sound and has also been implemented with various options including signal indicator, sound activated lights and volume controls which all help to inform of the baby’s status and also the device’ status. The voice activation feature is also available in the DXR-8 which re-activates it from sleep mode if there is noise coming from the toddler’s room and is also great for conserving battery life as it turns the video feed off when it is not needed.

2. Video
The DXR-5 comes with a 2.4 inch TFT screen which displays ultra-clear video image and capable of giving out 30 fps.

The DXR-8 has been equipped with a 3.5 inch full color LCD display in a sleek compact unit which also has a retractable antenna. The monitor also comes with the capability to interchange the lens, customizable viewing angle, remote pan tilt and zoom options.

Both of the models can be expandable to up-to 4 cameras so as to monitor different rooms at the same time or watch different angles of the same room.

Conclusion
Clearly the DXR-8 out does the DXR-5 when it comes to features and this is to be expected has the DXR-8 was made in mind with the notion of improving it from the previous model. However, it is also important to note that the DXR-8 is more expensive than the DXR-5 costing about $70 more. But if you are looking to give your baby the best attention available while also saving time on things like recharging, then DXR-8 is definitely the way to go.

VersusHost.com is a participant in the Amazon Services LLC Associates Program, an affiliate advertising program designed to provide a means for sites to earn advertising fees by advertising and linking to VersusHost.com (amazon.com, amazonsupply.com, or myhabit.com).
CERTAIN CONTENT THAT APPEARS IN THIS SITE COMES FROM AMAZON SERVICES LLC. THIS CONTENT IS PROVIDED “AS IS” AND IS SUBJECT TO CHANGE OR REMOVAL AT ANY TIME.